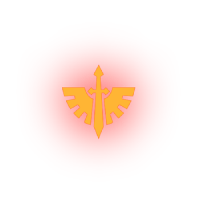 The Dark Angels is a chapter of the Space Marines in Eternal Crusade.

The Dark Angels were the first Legion created by the Emperor, and are considered among the most powerful and secretive of all the loyalist Space Marine Chapters. They are viewed suspiciously by many in the Imperium, who claim that the Dark Angels follow their own clandestine agenda.

Dark Angel organization differs from the practices used by many other chapters as laid out in the Codex Astartes. Elite formations such as the Deathwing Terminators and Ravenwing Bikers make up their Chapter’s first and second companies.