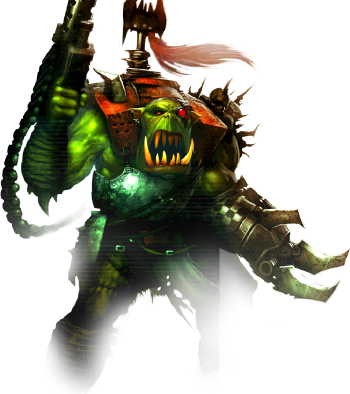 Brutal, green-skinned creatures that outnumber possibly every other intelligent race in the galaxy and have more in common with a great savage ape than a man. They delight in carnage and so great is their need for conflict that, without a more obvious opponent, the Orks will indulge in fighting bloody wars with themselves, just to ensure they get a good scrap.

United under a visionary new Warlord, this Ork Waaagh! has been on a sector-spanning crusade that has already seen hundreds of Imperial worlds fall. Driven by visions from their gods Gork and Mork, the Orks now have Arkhona targeted as the site for a truly apocalyptic war.

Orks come from a variety of Clans, each with their own unique battlefield culture. When they put their differences aside to fight for the glory of the Orkoid species, none can stand before the Green Tide.

Warriors of the Waaagh!

It may not matter to the countless victims of The Green Tide throughout the universe, but each Ork is a member of a tribe and then one of several distinct Ork cultures known as Clans.

The Evil Sunz love speed above all else, while Bad Moons equip themselves with the shiniest gear and Deathskulls are experts at looting and bashing weapons together. Goff are the most brutal, preferring to fight up close and personal.

While chaotic and frequently disorganized, members of different Clans sometimes put their differences aside to fight for the glory of the Orkoid species in the galaxy’s greatest conflicts.

The Orkz were created 60 million terran years ago by the long-since vanished reptilian species known as the Old Ones, whom the Orks call the Brain Boyz. Created as a warrior race, the Orkz were made weapons against the Necrons and their C'tan masters in an ancient conflict known as the War in Heaven. This war decimated galactic civilization, and led to the rise of the Eldar.

In the Eternal Crusade

The Ork Klanz Goffs, Evil Sunz, Deathskulls, and Bad Moons will be playable in Eternal Crusade, as well as the classes Boyz, Nobs, Mekboy, Painboy, Stormboy, and Weirdboy.

Orkz were designed as a militant and chaotic people, and thus reflect this in their culture. They are incredibly aggressive and muscular, but lack a great deal of intelligence and social ability (with the exception of the Oddboyz, who have a genetic predisposition to technology hardwired in them by the Old Ones). Though they are unified by a collective psychic ability, they lack individualist abilities and thoughts, operating in factions and castes. More often than not, these factions and castes are at warring states, making unified culture a thing foreign to most Orkz.