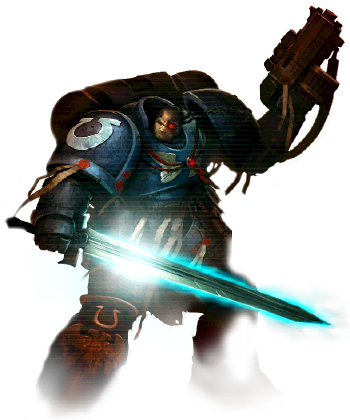 Answering a psychic distress call from across the galaxy, the Space Marines come now to the former Imperial world of Arkhona to purge it of treacherous xenos and the taint of heresy.

Space Marines are organized into independent armies, called Chapters, each harboring a specific gene-seed descended from the Emperor himself. A single squad is enough to threaten a planet, but multiple Chapters come together only in the Imperium's darkest hours.

Battle Brothers of the Adeptus Astartes

Each army has its own diversity through Chapters, Legions, Clans or Craftworlds. All warriors of a faction must choose one of these organizations. The choice affects not only your appearance, but also provides a set of bonuses and abilities unique to that division.

Together, elite warriors from different chapters may form Battle Squads, fighting as a unit and building their legend in the Eternal Crusade.

In the distant future, the Emperor of Mankind created the twenty Primarchs: genetically engineered superhumans possessing immense physical and psychic power. Each Primarch's genome serves as a template for a Legion of Space Marines. During the late 30th millennium AD, the Emperor uses the Space Marine Legions to conquer the human-inhabited worlds of the galaxy, uniting them into the Imperium of Man. As the campaign draws to a close, a number of Primarchs and their Legions convert to the worship of the Chaos Gods and rebel against the Emperor. The rebels are ultimately defeated and banished, though they continue to harass the Imperium as Chaos Space Marines. The Emperor is critically wounded in battle and placed on permanent life-support. The Legions of Space Marines who remained loyal to him are restructured into smaller units called "Chapters" to make a future mass rebellion unlikely.

Chapters in the Eternal Crusade

The Dark Angels were the first legion created by the Emperor of Man, thus becoming Legion I of the Great Crusade. Their Primarch, the enigmatic Lion El'Jonson, was found on the technocratic deathworld of Caliban. Their colors vary depending on which company the space marine serves. Third through tenth company are dark green and this makes up for most of the chapter. Next we have the Raven Wing who are made up entirly of fast attack vehicles and wear the panoply of the preheresy Dark Angels Black. Finally we have the first company the Deathwing who are entirly made up of Terminators and wear bone white armor with green robes.

The sons of Russ, the Space Wolves are the Emperors executioners, the beast he unleashes upon the enemies of man.

Space Marines go through heavy treatment and conditioning to become Space Marines, after which it is questionable whether or not they are human any longer.

As the super-enhanced body grows, the recipient must learn how to use his new abilities. Some of the implants, specifically the phase 6 and 10 implants, can only function once correct hypnotherapy has been administered. Hypnotherapy is not always as effective as chemical treatment, but it can have substantial results. If a Space Marine can be taught how to control his own metabolism, his dependence on drugs is lessened. The process is undertaken in a machine called a Hypnomat. Space Marines are placed in a state of hypnosis and subjected to visual and aural stimuli in order to awaken their minds to their unconscious metabolic processes.

Physical training stimulates the implants and allows them to be tested for effectiveness.

Just as their bodies receive 19 separate implants, so their minds are altered to release the latent powers within. These mental powers are, if anything, more extraordinary than even the physical powers described above. For example, a Space Marine can control his senses and nervous system to a remarkable degree, and can consequently endure pain that would kill an ordinary man. A Space Marine can also think and react at lightning speeds. Memory training is an important part of the indoctrination too. Some Space Marines develop eidetic memories. Obviously, Space Marines vary in intelligence as do other men, and their individual mental abilities vary in degree.

After the Horus Heresy the Space Marine Legions were divided into Chapters, follwing the newer indoctrine; the Codex Astartes. Written by Primarch Roboute Guilliman of the Ultramarines Legion, it changed the Legions capacity from however many there were previously to roughly 1,000 Space Marines as to prevent another grand scale civil war from happening again.

The Space Marines serve the Imperium of Mankind by destroying its enemies wherever they are, but their only official obligations are to the Emperor.